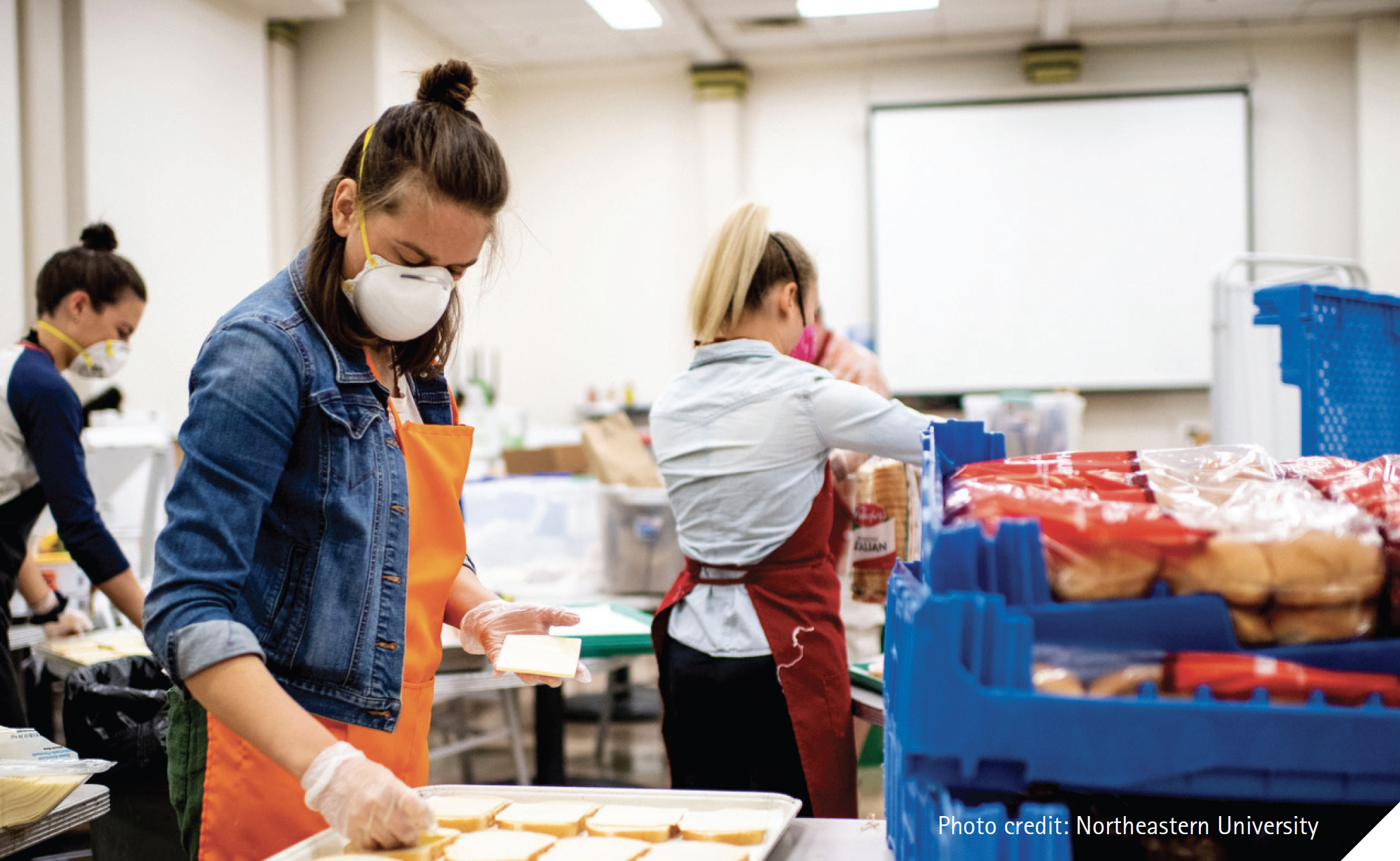 Serving up security at a non-profit soup kitchen.

My Brother’s Table replaced their broken security system with an Axis solution that enables staff to control access and efficiently monitor property.

My Brother’s Table has been providing free meals, seven days a week, to the local community of Lynn, Massachusetts since 1982. In addition to serving more than 80,000 meals a month, the soup kitchen supports an onsite clinic staffed by a nurse practitioner. Despite being a lean organization – just two full-time employees and a handful of volunteers – My Brother’s Table also delivers weekly meals to the homebound, people in respite care, and those incarcerated in the local police lockup.

With its analog security system beyond repair, My Brother’s Table, one of the largest soup kitchens in Massachusetts, decided to invest in a completely new network-based solution. They wanted a comprehensive solution, one that would vastly improve coverage of their interior spaces, the parking lot, and surrounding streets; provide better access control to offices, the kitchen, and the loading dock; and be operated easily by a small staff of employees and volunteers.

Meals Served Per Month at My Brother's Table

K & M Communications, an Axis partner, replaced the old analog system with a completely new Axis network-based solution. They installed new wiring to support two dozen Axis high-definition and megapixel network cameras. The M-line cameras cover more area than their analog predecessors and include enhanced features for day/night recording. Axis video intercoms linked to Axis door controllers allow staff to screen visitors on a touchscreen 2N answering unit in the reception area or through a desktop with AXIS Camera Station video management software. Credentialed users can unlock a door by swiping their fob at an Axis card reader or through their phone app.

With AXIS Camera Station video management system (VMS), office staff can monitor all the cameras, card readers and intercoms from a single screen. The new set up has proved to be a real timesaver, increasing productivity because office staff can instantly check on what’s happening in other areas of the building, like the clinic or kitchen or loading dock, without ever leaving their desks. They can immediately see whether the nurse practitioner is available to see patients or how many people are waiting outside to pick up meals. The ability to remotely view the cameras on a phone app also saves executive staff from having to drive back to the office after hours to see who entered the building and triggered an alarm. 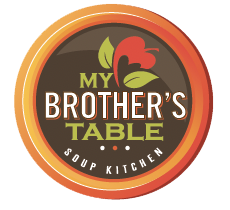 “Being so understaffed, we rely heavily on our Axis technology to keep our volunteers, service providers and guests safe wherever they are in this huge facility. We can see what’s happening in all the different corners, control access to specific doors, and still create a welcoming atmosphere for our guests.”

My Brother’s Table has been providing free meals, seven days a week, to the local community of Lynn, Massachusetts since 1982. In addition to serving more than 80,000 meals a month, the soup kitchen supports an onsite clinic staffed by a nurse practitioner. Despite being a lean organization – just two full-time employees and a handful of volunteers – My Brother’s Table also delivers weekly meals to the homebound, people in respite care, and those incarcerated in the local police lockup.

“Prior to COVID-19, we’d typically seat 300 to 600 people a day in our dining hall – families with children, single adults,” says Dianne Hills, Executive Director for My Brother’s Table. “They’d come for a nourishing meal and often linger just to socialize with each other. Since the pandemic, however, we’ve had to pivot temporarily to meals to go.”

To protect the daily flow of people, it was important to have a working security system. Unfortunately, most of the aging analog cameras and intercoms at My Brother’s Table had stopped functioning. Hills reached out to K & M Communications, an integrated security solutions provider and Axis partner, for help.

“Our first step was to upgrade the wiring to CAT-6 network cabling to support all the IP devices we were going to install,” says Mike Coffey, Operations Manager of K & M Communications. “We replaced their old cameras with new Axis M-line HDTV megapixel cameras and added cameras to areas that weren’t covered before. To improve door security, we swapped out their old intercoms with new Axis network video intercoms and linked them to AXIS Camera Station Secure Entry which allows them to control their video and access control systems within a single platform. We also installed Axis keycard readers at designated doors for credentialed volunteers and service providers to use for entry into the facility.”

K & M Communications designed the system for flexible operation. Hills can view the cameras, communicate with visitors at the video intercoms installed at door entries, and unlock doors through AXIS Camera Station Secure Entry on the office desktop and through the AXIS Camera Station mobile app on her smartphone. Hills can also program the guest door to remain unlocked during serving hours. Volunteers at the reception desk use the intuitive 2N® Indoor View touchscreen answering unit to communicate and screen people at the door via the video intercom and remind them to wear a mask before buzzing them in.

“Managing such a large space with such a small staff is a whole lot easier with our new Axis system,” says Dianne Hills. “For instance, if someone asks whether the nurse is in, I don’t have to leave my desk and walk to the other side of the building. I can just pull up the clinic camera and see if she’s there. It’s a real time saver.”

The Axis solution has also changed how she fields late night calls from the alarm company. “Now that I have the AXIS Camera Station mobile app on my smartphone, I can view the cameras remotely from home instead of driving back to office to see what’s going on,” says Hills. “It’s been a real bonus for my personal life.”

Since COVID-19 forced the soup kitchen to switch from indoor dining to meals-to-go, Hills uses one of the new outdoor Axis cameras to monitor the crowd lining up on the street. “Instead of sending someone out to do a headcount, we just view the live video of the street camera to see how many guests are still waiting outside to pick up meals,” says Hills.

Switching from keys to fobs

Installing Axis keycard readers have allowed My Brother’s Table to dispense with metal keys for several doors. Through AXIS Camera Station Secure Entry, Hills can program unique credentials for each fob user, limiting their access to specific areas of the building. “It’s a lot easier to deactivate a fob than it is to retrieve a key from someone who no longer works here,” says Hills.

One added benefit of fobs that Hills hadn’t anticipated is that they reduce wear and tear on the crash bars. “Our doors are fire-rated, really heavy metal doors with crash bars on them,” says Hills. “With all the locking and unlocking of the mechanisms, up to 50 times a day, we end up replacing them a lot. Now that we use a fob instead of a lock and key, I expect we won’t have to replace them nearly as often.”

Focusing on quick resolutions to problems

Having reliable, high quality network cameras, intercoms, and access control all centrally management in AXIS Camera Station VMS has certainly made a difference in maintaining civility, safety, and security at the soup kitchen.

“We had a patron report that something had been stolen from his bike that he had parked outside the building,” reports Hills. “We found the video clip of the culprit and showed it to him. It turned out that it was a friend of his so everything was okay.”

When someone backed into an employee’s car and dented one of the doors, Hills did a quick intelligent search of the recorded video in AXIS Camera Station and found exactly when someone had backed out of the garage across the street and drove straight into her car. “In less than two minutes, we knew exactly which vehicle it was and when the accident happened – all forensic details she could include in her police report,” says Hills.

When the crowd outside her office gets particularly loud, Hills checks the hall cameras to confirm the group is just being boisterous, not combative.

Hills also used Axis network intercoms to address a mail delivery issue with the local post office. “On weekdays, the mail carrier rings the bell, we buzz them in, they drop off the mail and pick up whatever we’re sending out,” explains Hills. “When we told the local postmaster that daily delivery was getting pretty sporadic, they insisted that the carrier was coming regularly, but no one was answering the bell.” Because the video intercom records every time someone rings the bell, Hills was able to prove that in the space of two weeks, the carrier only rang the bell four times. “That was a great perk that I hadn’t anticipated,” said a delighted Hills.

“Food insecurity continues to be a problem for our community, whether it’s families unable to stretch their budget, people who are homeless or the elderly,” says Hills. “But thanks to generous public donations, selfless volunteers, and our new Axis technology, we’ve been able to provide a safe and secure place for them to turn.”